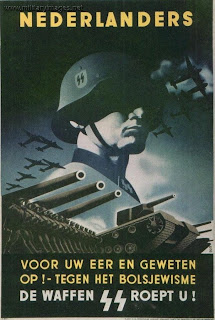 A fascinating new book, Gotz Al's Hitler's Beneficiaries: Plunder, Racial War, and the Nazi Welfare State, has a look at the Nazi system of governance. Basically, they didn't have one: they had a system of invading other countries and sucking the money out of them and then using that to balance the budget. One Reichsbank study estimated that the first year of occupation cost Holland 180 percent of its normal state revenues, Belgium 200 percent, France 211 percent, and Norway 242 percent.

After every military victory, no matter how quick and relatively painless for German forces, the same problems with finances and food supplies kept cropping up ... [this] meant that the Nazi leaders had to push ahead with further military expansionism. Any hesitancy would have led to the end of the regime.

This confirms what I have long suspected about Nazism: that it was suicidal. Not just that it ended in suicide, although it did for all those in the bunker, but that it was self-destructive in essence. War didn't interrupt their plans: they had no plans for what they might like to do when they weren't invading people. Invading people was what they did, all the time. As such, it was doomed to failure, from the word go. When people say: what might life for us have looked like under Nazi rule, they are posing a non-sensensical hypothesis. Nazism was a self-devouring flame.

I feel the same way about Al Qaeda. We are regularly told that they want a worldwide Celiphate, but if you look at their statements, they have no plans for what to do, were this unlikely event to occur. They have no minister of agriculture. No opinion on taxation. No preference for which day is best to collect the garbage. They have no system of governance. Their chances of implementing it are therefore, and perhaps unsurprisingly, zero.