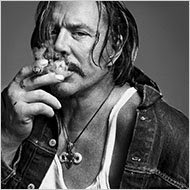 It's not often that I feel like coming to Mickey Rourke's defence. But the snide account of his childhood in the New York Times offers an opportunity that is hard to pass up.

The piece disputes Rourke's mistreatment at the hands of his step father, Eugene Addis. “He never spoke the truth in his life,” Addis is quoted as saying, pointing out that he never abused him or his brothers “because they never needed manhandling. Mickey was the best kid I had. I had no reason to abuse him... Listen! Right now I’m in better shape than Mickey Rourke ever was. If I wanted to kick his ass I could. But I never did.”