The Sound of the Crowd 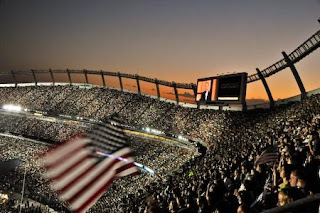 "His style is called professorial, though in their wildest dreams professors never find themselves addressing cheering throngs. He is also accused of populism, perhaps because he seems to feel that government of the people should also be government by the people and for the people. It is sentiment of this kind the wise of the political world tend to dismiss as lofty, as starry-eyed. And he is accused of presenting himself as a messiah. This charge is arrived at by reasoning backward from the fact of those crowds... Democracy in contemporary America can be enacted only on a giant scale. The calculations that lie behind cant phrases and broad gestures are no doubt unavoidable. But the core of it all is the candidate and the crowd." — Marilynne Robinson, The New York Times

80,000 people gathered to listen to Obama's nomination speech. I watched it on TV, along with the other 38 million — more than the Oscars, the Olympics — and couldn't wait for the cameras to pan back over that crowd. It's all I wanted to watch. I've never seen so many Americans in one place. Every speaker that came in front of it, even the old pros like Gore, looked slightly overwhelmed. The size of it brought its own peculiar dynamics: laughter didn't really register except as a sort of distant rustle. And there was none of that pantomime booing that bedevils political speeches. Which left only the cheering: slow to build, slower to dispel, starting in one part of the crowd, then going on a lap of the stadium, by which time it had transformed into the kind of roar familiar only to sports fans. People can caricature the Obama crowds all they like, but they are mistaken to think it dewy-eyed or devotional, for what lies behind those cheers — what brings 80,000 people out of their homes — is anger. The best kind of anger, transformed en masse into something altogether more uplifting, but anger nonetheless.