The day I did my photocopying 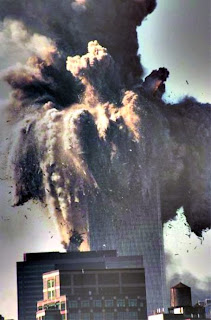 After watching it on TV for just under an hour, I went outside. I had some photocopying I needed to do, so I left my apartment building and as I turned the corner onto seventh, I saw the first tower collapse. I was about half a mile away, so I couldn't hear any sound: the building just turned to dust, and descended. Then I turned around and went and finished my photocopying. As I entered the store, the girl behind the counter pushed past me, in some distress, to see what was happening, but I headed inside, got my copies, paid and returned home.

I know: it's weird. I was probably in shock. The way I see it now, I had a choice: either I could exist in a world in which two buildings had been hit, more might follow, we were at war and all bets were off. Or I could exist in a world where two buildings had been hit, but that was it, and tasks like photocopying could still be finished. I chose the latter. I don't know what that means in terms of my chances if I had been inside the towers. In her new book, The Unthinkeable: Who Survives When Disaster Strikes And Why, Amanda Ripley provides a fascinating statistic: on average World Trade Centre survivors waited, on average, six minutes before heading downstairs, and some waited as long as 45 minutes.

One office worker, Elia Zedeno, said that immediately after the first plane struck, she wanted nothing so much as to stay. She called relatives to get more information, then started walking in circles around her cubicle, looking for things to take with her. "Crowds generally become very quiet and docile in a true disasters" writes Ripley, quoting a Canadian psychologist, Guylene Proulx, who says, "Actual human behaviour in fires is somewhat different from a 'panic' scenario. What is reguarly observed is a lethargic response."

Few people understood that is was more than just a fire, of course, and nobody expected what was about to happen. Zedeno started making her way down the stairwell, and saw the second plane hit the other tower. Everyone went to the window, then "Every single one of us turned around and marched right down the stairway as if nothign ever had happened. We were like robots. There were no comments as to 'What do you think happened?' Nobody pushed anybody. Nobody tried to get back into the the stairway before anyone else. Everybody just went right back a group and continued to funnel into the stairways in an orderly fashion."