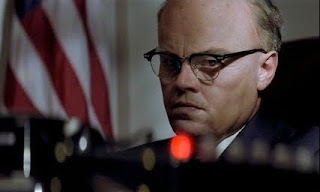 One of the opportunities presented me by my wife's absence — apart from those for weeping fits, dietary experimentation and dust-ball accumulation — is the opportunity it presents me to catch up on the most depressing movies I can lay my hands on — the more depressing, the better. For some reason that escapes me we spent last Christmas apart, which I took that as a sign to go on a massive Michael Haneke bender, during the course of which I lost all sense of time and space, human warmth leaching from me, the lights of nearby towns and hamlets blurring into a distant memory, until I stood in our apartment — a poor, bare, forked animal, ready to feast on any Romanian abortion epic or neo-brutalist British kitchen-sink drama you could throw my way. The only problem was resurfacing without getting the bends. Kate came back for New Year's Eve and I — still in some kind of altered state — suggested we watch Ken Loach's first film Kes, forgetting that in the final reel the poor falcon, by virtue of symbolising youth's only hope of escape from the grim, dehumanising totalitarianism of the English education system, gets it in the neck with a shovel. I should have known better — all animals appearing English films from the seventies get it in the neck, be they otters or rabbits, if not with a shovel then a bullet. It's the closest we ever got to making The Way We Were. I'm not sure Kate has forgiven me.
Much better to keep this kind of filth for when she's gone. So my first thought, upon waving her off to see her parents in Ohio, was simple: J Edgar. I knew there had to be a place in my life for Clint's stolid two hours of desaturated gay repression and institutionalised paranoia and this was surely it. I wore my Navy Peacoat, rather than my usual Mackintosh, not because I have any particular fear of being thought gay, but a closeted gay is a different matter. In the end, Eastwood didn't quite deliver: despite a lighting scheme that made me worry I'd paid the electricity bill, and the sight of Judi Dench bearing down on poor J Edgar's soul like the mother of Norman Bates herself, I rather enjoyed his movie, and even felt a little trembly of lip towards the end. Nothing like the unconsolable storm of grief that descended on me at the end of Bridges of Madison County, but a tremble nonetheless and for that I was grateful. Clint really getsrepressed emotion, the more depth-charged the better, and something about the tidy little kiss that Leonardo Di Caprio lands on Armie Hammer's forehead at the end of J Edgar did the trick. B-
But not nearly depressing enough, so this afternoon I headed off to see Paddy Considine'sTyrannosaur, which promised so much: alcoholism, wife battery, Northern pubs, rottweilers, the lot. Could it deliver? I wore my peacoat again — big mistake. I should have gone with the Mackintosh. Peter Mullan wears an almost identical peacoat in the movie, thus pointing the finger of shame my way, singling me out as I left the theatre as a fellow wife-beater and drunk. Naturally, there were only five or six men in the theatre, all of them were on their own, and all of them were, in my mind, as I was in theirs, wife-beaters, come to make their amends, to pay silent penance for their sins. You can't win, you see. Closeted gay or wife-beater — these are the two options faced by any man in his forties with limited wardrobe options going to the cinema alone. Anyway. The film. It's grim. A firm proponent of the fark-you-you-farking-caant school of British filmmaking. There's black eyes, racism, dog bludgeoning — and drinking, lots of drinking, of the kind that necessitates you stare into your pint as if discerning in the bleak apartheid of your Guinness the unbudging, fulminous morass of your life. Mullan is a little acting-workshopy — I preferred his alcoholic in My Name is Joe — and the ending is an out-and-out wrist-slasher, but Olivia Colman is as terrific as everyone says she is, and the Leisure Society song at the end is heaven sent. B-