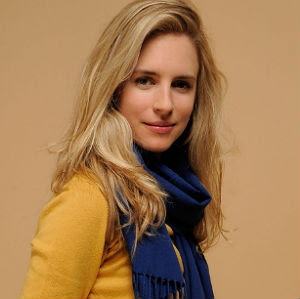 'The first thing Brit Marling does, upon entering the suite at the Crosby street hotel where our interview is to take place, is to walk right over to the large promotional cut-out for her movie Another Earth — on which she is depicted staring dreamily at the camera in front of a large milky planet— and turn it back to front. “We can’t have a serious conversation with this looming over us,” she says. “Remind me to turn it back when they come to get me.”

Take it as a sign of her newness to the Hollywood hall of mirrors. Just six months, Marling was just another hopeful, living in shared digs with two screenwriter friends, trying to find a distributor for two micro-budget movies which were all that stood between her and a role in torture porn. Then both films, Another Earth and Sound of my Voice, got accepted at Sundance where they were picked up by Fox Searchlight and overnight Marling became the festival’s breakout darling: a brainy, beautiful poster girl for soft-knit, eco-conscious, indie fabulosity. Which is how she finds herself in a hotel suite in New York, staring at a cardboard cut-out of herself posing in front of the planet Earth. No wonder she flips it. “The thing that is so crazy about it is that you are the same person before and after,” she says. “Your skill set hasn’t changed. You are the same person who could not audition anywhere in town and nobody would hire you do anything, and now suddenly you can read some of the best scripts that are being written. What is that all about? I’m still trying to wrap my head around that.”

To get the obvious out of the way: she is extremely beautiful, with sky-blue eyes and long, fine, blonde hair of the kind rarely seen outside ads for conditioner, exuding a kind of alt-rock singer-songwriter vibe that pulls her towards paisley and floppy hats. She’s like a Manhattan-era Meryl Streep, reinvented for the Wikileaks generation, holding forth on a variety of subjects from the invention of the light-bulb to the macro-economics of the paper napkin in front of her with the high-flying radicalism of youth, while registering consistent bookworm-in-the-limelight amazement that the world is paying her any attention at all. A beautiful intellectual! And in the movies, no less!'

— from my interview with Brit Marling for The Independent