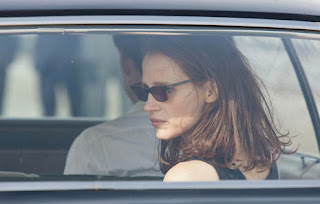 Jessica Chastain is easily the best thing about The Debt, John Madden's fitfully engrossing thriller about Jewish vengeance. It was hard to tell exactly what kind of actress she was in The Tree of Life, so diaphanous in conception was her character, a radiant earth mother whose main dramatic function was to embody the abstract principle of 'Grace' and put out the washing with small animals in attendance, like Snow White. There's no dispelling the slight air of otherworldiness that attends Chastain's sculpted beauty – I can think of no other actress better placed to play Botticellli's Venus, rising from the ocean atop a clam shell — but The Debt adds to her repertoire some nifty karate moves, not to mention a lethal way with hypodermics, and she seems much the happier for it. She plays a Mossad agent sent back to capture a sadistic Nazi doctor, 'the surgeon of Birkenau', by posing as one of his patients, even submitting to a series of gynecological exams, while the good doctor teases apart her cover story. I haven't been so skeeved by the sight of stirrups since Cronenberg's Dead Ringers. Satisfyingly, Chastain then gets to snap her legs shut around his neck, plunge a needle into his neck and bundle him into the back of a waiting van, and from there to an apartment where they feed him porridge, bathe him and indulge in intermittent bouts of violence designed to show that the Victims are Becoming Their Oppressors. Yawn. From this point, the life slowly leaks from the movie which turns into a housebound version of Munich. I strongly suspected the nefarious influence of a play behind some of the more full-throttle soul-searching, but upon getting home I found out the film is adapted from an Israeli movie, so there you go. But Chastain is glorious. This Venus has game: her acting instincts are quick, sure and unshowy, while her beauty is of that fascinatingly multi-planed sort — alternately luscious and drawn — that makes you hungry for as many angles as possible. Perfect for the movies. I'd love to see her in 3-D. C+