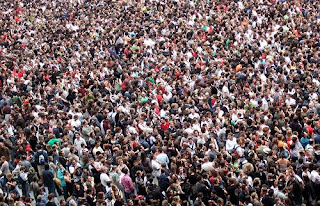 An interesting exchange of tweets with a reader about why it bothers me when a salesperson informs me that a shirt I've just bought is "proving popular" but not when a movie I like is a hit. The answer seemed clear enough to me at the time — clothes are a personal statement whereas movies are a mass medium, such that finding your reactions echoed by 200 strangers is part of the fun. But not everyone shares my populist enthusiasms, my movie tastes are still in many way more personal than my choice in clothes, and, truth be told, my populism is a little patchy these days. I love that Rise of the Planet of the Apes was a big hit, but it causes me untold mental anguish pain that Transformers 3 was, partly because it reinforces the stereotype that the mass audience is dumb and that some filmmakers are successful by appealing to the "lowest common denominator." I've never got that phrase, and always resisted the way it equates what is lowest in us with what is most common, whereas I believe the opposite: that what is lowest in us appeals to our selves only, and commonality offers us our one shot at transcendence. I have never been happier than when lost in a 600-strong crowd, all rocketting out of our seats at the sight of a hand reaching out of a grave to grab Amy Irving's hand. It's part of what I love about the movies. This being so, I clearly have to find a way of explaining Michael Bay. I had a shot at it in my book Blockbuster: How Hollywood Learned To Stop Worrying And Love The Summer, where I road-test the idea of tiered movie love. Simply put: the endorsement of a film implied by a ticket sale isn't of uniform strength, but varies from film to film and from era to era. It used to be a fairly safe bet that a ticket bought was a sign of a happy customer. One imagines most of the people who went to see The Godfather upon its release had a good experience with the film — the odd grumpus aside. Today, in the era of franchise filmmaking and $100 million marketing campaigns and 'pre-saleability', it has become possible for the studios to gaurantee a certain number of bums on seats. Not entirely. Word of mouth is not dead — Transformers 3 did worse than the second film, because the second film was so reviled — but remember that the second film made $402,000,000 domestically. That's a film people didn't like. Or to be more accurate: it was a film most of its audience didn't hate. And it is this category of film — neither good, nor bad, loved nor unloved, but which enough people sit there, neither loving nor hating, in enough numbers to generate a profit — that the studios have perfected the art of making. They have learnt to fake a degree of popularity. Popularity is not what it used to be. Transformers 3 is not popular in the same way that The Godfather was popular. A lot of people loved The Godfather, but a lot more people than loved The Godfather didn't hate Transformers 3. It seems obvious enough to say this, but ticket sales do not measure strength of movie-love, which means we here in some highly speculative realm between the byzantine ways of the box-office and the mysteries of the human heart. We are talking about the movies, in other words. But try it next time a movie you hate goes bananas at the box-office or a movie you love drops like a stone: subtract 'pre-saleability' — your best guess, anyway — and see how the world looks then. A world in which Inception is the biggest summer hit of 2010, and Captain America in 2011 (also Apes, which I'm not persuaded has in the way of pre-sold pixie dust, not with the right demographic anyway). A world where Michael Bay's robots and Johnny Depp's pirates scramble for a foothold and Pixar reigns supreme. Suddenly, Hollywood hit-making doesn't seem like such an sulphurous activity, or popular taste as dumb and drooling as it once did. You can resume your place in the cinema queue with less suspicion for your fellow movie-goers and even something like pride.