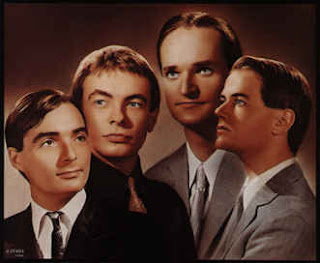 It's been a while since I last professed my deep and abiding love for Kraftwerk. Not that I've avoided the subject, exactly. It just so rarely comes up. So few conversations beckon in the direction of strange German synth quartets from the seventies who pretend to be robots. A conversation about Africa Bambaataa will get you there, because he sampled Trans Europe Express on Planet Rock. The other conversation that gets me there is "what was your first concert?" People normally say things like "Haircut 100" or "Bon Jovi" and laugh with affectionate irony for their old teenage selves in all their awkward, knock-kneed glory. Or they go "the Police" or "The Jam" and everyone goes: cool. Then someones says "What about you, Tom?" and I say "Kraftwerk" and everyone goes quiet. There's Strange German synth quarters from the seventies who pretend to be robots are kind of conversation killers. They're not the kind of thing you can put down to growing pains, or teenage angst, or anything awkward or embarrassing you can laugh about afterwards. They're about the opposite of all these things. They're about locking yourself up tight and pretending to be robot so that no-one can get to you. They're about much more than that, of course, but that was the appeal for me, primarily, in 1981, when I went along to the Dome in Brighton, a recent child of divorce, to see Kraftwerk perform live in 1981 along with my fellow Kraftwerk fan, Eddie Cresdee, with whom I had spent most of that summer recording Kraftwerk inspired dirges on two Moog synthesisers. We had chosen another friend of ours from school to provide the vocals, not because he could hold a note, but because he was German and wore black shirts that he buttoned up at the collar in an impressively emotionless fashion. Looking back, it's just as well that we had successfully located Kraftwerk as role models. If you are two English school boys with a couple of Moogs and a German friend who can't sing, Kraftwerk and not just a very comforting model to have, but pretty much the only one in sight. I don't know why Jan wasn't with us that night, but there we sat there, two whey-faced English boys obediently drinking in every bleep and bloop, swaying mesmerically to every electronic arabesque and arpeggio, contained and held aloft within a sonic universe that seemed to be unfold inside our heads and all around us, until it was difficult to tell where we ended and the forces of anonymous modernity began. I was moved and still am by Kraftwerk's music, in ways that are hard to explain. But I recently attempted with my wife. "What you have to imagine," I said, "is a Germany that was obliterated in the war, who could not even talk about the past and whose only hopes seemed to rest in the speed and efficiency with which technology could deliver them an entirely new future. The Trans Europe Express. The Autobahn. Nuclear power. To grow up in Post-War Germany was to be witness to a lot of construction and if you were a young German boy you saw a lot of cool-looking machines building stuff that all the adults around them seemed very invested in. They were the Marshall Plan made into music, basically." My wife seemed satisfied with that. She listened, nodded, and then she went back to her magazine.