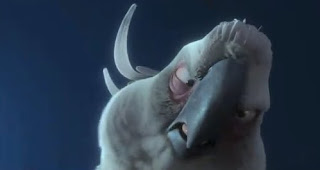 If you wanted to make a cartoon about a Brazilian blue parrot learning to fly — a great idea — but in addition to that needed to make the hero American, and thus had to find a plot that shoehorned those two separate journeys — first to Rio, and then into the air — then Rio is probably the best cartoon about (half) Brazilian blue parrots you could make. The film makes way more demographic than organic sense. The plot is all right angles, reroutes and restarts, so the characterisation has no firm perch. Jesse Eisenberg and Ann Hathaway spend most of the movie handcuffed together like Robert Donat and Madeleine Carroll in The 39 Steps, but they're neither of them flamboyant vocal performers so it was hard to lose the mental image of Mark Zuckerberg nuzzling contemporary cinema's most doe-eyed Princess. (Hathaway doesn't need animating: she's pre-Disneyfied already). Leslie Mann does much better as the parrot's bookish owner: I never tired of catching the animated echoes of Mann's pert but expressive body language, a little reminiscent of Hepburn's in Funny Face as she lets her librarian's hair down and learns to samba (but keeps her spectacles). The film's most reliable source of genuine pathos, as she was in Knocked Up, Mann is not onscreen nearly enough. Rio has some swoop to it, thanks to a punchy color scheme and some snappy set-pieces, the best through the shantytowns of Rio, suspiciously cleaned up, but with those corrugated tin roofs doubling up as handy sleds, as we long suspected they might. The rest of Rio looks horrible, though, as soulless and bland as the cgi city in The Incredibles: the filmmakers needed to stick to the jungle and stay well away from the row of hotels by Copacabana beach but for some reason that I could not fathom out felt irresistably drawn back to it, like a tourist on a leash; and the eerily floodlit climax, set during Carnival, looks like a fascist beach rally: Albert Speer does the cha-cha-cha. If it had been me, I would have forgotten about including North America, started the film in the shanty towns and then dived into the jungle, where the hero could fall in love, learn to fly and do all the things Brazilian blue parrots need to do before their 90+ minutes are up. C+