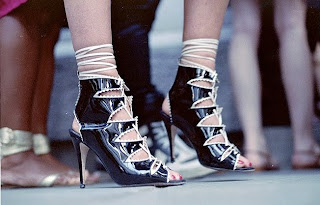 The 82-year-old photographer Bill Cunningham, who photographs street fashion for the New York Times, now the subject of a new documentary by Richard Press, ekes out the kind of spartan existence which is normally the preserve of Samuel Beckett protagonist. Dressing in factory-worker blue tunics, and dining on $3 sandwiches he lives in a tiny rent-stabilised apartment in Carnegie Hall that is crammed with filing cabinets containing 4 decades worth of old negatives. Every day, he fetches his bike from a storage closet and sets out to photograph the women and men he sees on New York streets, tuning out the noise and traffic to capture a flash of ankle, a stylish cuff, a shock of pink hair — anything which picks out an individual from the rush-hour pixillation. In the evening he cycles to more prestigious, red-carpet events where he refuses to touch the food and drink, flitting from bracelet to bustier like a pollinating bee, before returning home at 2am and going to sleep atop a hardboard bed propped up by old magazines. His life is an experiment in elemental reduction, like that of a miser, except that unlike a miser, the emotion Cunningham has reduced his life to is not resentment, but pure, unadulterated joy. His face a picture of almost permanent surprise, his voice pitched as gee-whiz high as Jimmy Stewart's, he exudes a contagious exuberance which everyone around him catches instantaneously. He's like a cross between Stewart and David Helfgott — savantishly attuned to his own hummingbird frequency. He shows sadness only once, briefly, when Press asks him whether he's ever enjoyed a romantic relationship: the answer is no — he lives off the nectar of his work alone — but the sadness doesn't linger. There's not one iota of waste to him. Cunningham's gifts are too generous, his delights, like Anthony's, dolphin-backed: they rise from this film with the unmistakeable contours of a life well-lived. B+