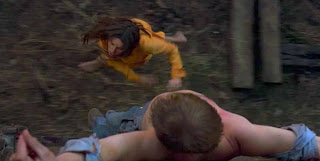 From the final scene of Scorsese's Boxcar Bertha (1972) in which Barbara Hershey, eerily prefiguring her role as Mary Magdalene in The Last Temptation of Christ, runs alongside the body of David Carradine who has been crucified against the side of a train. Which is better (or worse), the actual depiction of Christ's crucifixion or the subtextual version of the same? I'm inclined to go with subtextual, except that of course, that the subtext never stays sub- in such instances (Dead Man Walking, Whistle Down the Wind), but leaps out at the viewer as boldly as a 3-D rake or broomstick. How about neither? How about: No crucifixions?