We are all Lord Voldemorts now 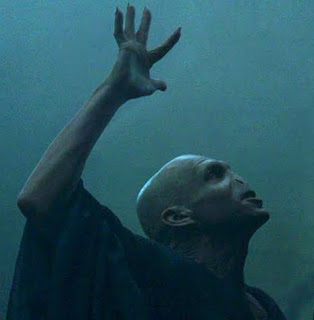 "Dark means serious. Dark means shadows. Dark means not evading the sad and inexplicable complexities of life—or even worse. Dark is grownup. I was mulling this when I read a short piece in the November 25 New York Review of Booksabout a previously unpublished confessional poem that Ted Hughes wrote but never finished before his death in 1998. It dwells on whom he was sleeping with, and where, on the weekend when his estranged wife Sylvia Plath committed suicide. Don’t count me among those fascinated by either Plath’s death or Hughes’s infidelities, any more than among those obsessed with whether the Rosenbergs were guilty. Those are special tastes. But Carol Ann Duffy, Britain’s current poet laureate, did get my attention by praising the poem as “the darkest poem that he wrote about the death of Sylvia Plath,” one that “seems to touch a deeper, darker place than poem he’s ever written.” Actually the NYRB article, by Mark Ford, leaves a rather different impression, of a man’s desperate effort to exorcise the memory of squalid, shameful behavior." — Peter Steinfels

Or, as the Pet Shop Boys sang on Miserablism, "Just for the sake of it, make sure you're always frowning / It shows the world that you've got substance and depth." It will also get you work. When screenwriter Alan Ball was called in for a meeting with Dreamworks executives to talk about his script for American Beauty he was told “’Could you just make it just a little more fucked up,’ which is not a note that you get in Hollywood very often. And I though, ‘Wow!’ And that gave me free range to go a little deeper, go a little darker, go a little more complicated.” It's the modern catechism: Deeper = Darker = = fucked up = good. It may have been the first time in the history of Western civilization that a creative artist was asked by his creative overlords to make his work more fucked up, but it was certainly not the last. At the cinema you cannot move for actors exploring their dark sides these days, in small, gritty dramas designed to puncture the upbeat pabulum we are spoonfed by the studios. Turn to the upbeat pabulum spoonfed us by the studios, however, and the picture is the same. “There’s no denying it, these are dark times,” begins the new Harry Potter, which spends most of its time with out teenage heroes in a tent, arguing about the hopelessness of their situation while the forces of darkness amass. Amongst current blockbusters, only Star Trek dares to abjure skies the colors of rust and plots the size of vengeance. On TV, it is the same story: writers pursuing that holiest of modern virtues, “edginess”, by cross-wiring our sympathies with undertakers (Six Feet Under), serial killers (Dexter) and drug dealers (Breaking Bad). When Battlestar Galactica dared to end on a rare hopeful note the fans were outraged. Meanwhile, Kanye West blanket-coverages the airwaves with his latest album, My Beautiful, Dark Twisted Fantasy. “It’s a strange critical phenomenon that only works of art that are ‘edgy’ or ‘scary’ or ‘dangerous’ are regarded as in anyway noteworthy," Nick Hornby recently complained. "Can’t we let them console, uplift, inspire, move, cheer? Please?." What happened? Wasn’t pop culture supposed to be about fake uplift? The ambrosial optimism of Disney and Spielberg? The false consciousness of the Hollywood happy ending? Such is the view of pop culture that has reigned since its inception, when F R Leavis first lambasted “the cheapest emotional responses” of newspapers, Auden declared “I don’t see how any civilized individual can watch TV far less own a TV set” and Virginia Woolf waltzed by the queues at her local cinema ( “These lowbrows are waiting, after the day’s work, in the rain, sometimes for hours, to get into the cheap seats and sit in hot theatres”). The result was Modernism, the world's first anti-mass aesthetic, designed to be as difficult, dark and mass-audience-alienating — a “virtuouso art of nerves” (Ortega y Gasset). By a process of assimilation that someone, some day, should write a book about, these attitudes have now been wholly subsumed within the pop culture they once sought to oppose. These days it is mass culture that harbors the anti-mass aesthetic. Avante-garde values have become the buzz-words of advertisers, corporate management gurus and high tech entrepreneurs. As Jim Jarmusch has recently said, “I reach for my revolver when I hear the word quirky. Or edgy. These words are now becoming labels that are slapped on products to sell them.” Superheroes boast dark sides that would put a Conrad antihero to shame. A trip to the latest David Fincher film involves more radical alienation than a season of Brecht. Darren Aronofsky has more contempt for the minnows of the mainstream (“to find Paris Hilton's partying interesting, is beyond nauseating”) than Pound's Cantos. Nor are they marginalised in any way for their radical stances: between the two of them, you're looking at two of this years' biggest Oscar winners! We queue up to applaud darkness. We toast the misanthrope. We ask for morbidity's autograph. Whether it be the fleshy self-flagellations of Black Swan or the rusty apocalypse of the latest Terminator, I am reminded of P G Wodehouse's rewriting of The Wasteland:—

“Desolation,
Doom,
Dyspepsia
And Despair.
I am a bat that wheels through the Air of Fate
I am a worm that wriggles in a Swamp of Disillusionment
I am a despairing Toad
I have got dyspepsia”.