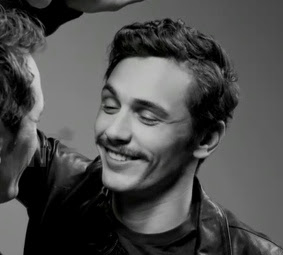 I don't mind admitting to a certain bashfulness whenever James Franco comes on the TV. My wife will tell you this is a vast improvement on last year when I succumbed to a series of doe-like flutters whenever Carey Mulligan made an appearance on our television. She described my face as rather like that of Eliott's whenever E.T is in trouble, happy or sad. The fact that this year's trance-like state is induced by Mr Franco is not without good reason. Whether indulging in feverish make-out sessions with the actresses on General Hospital, or popping up in the 'trailer' for Gary Shteyngart's Super, Sad, True Love Story, Franco has conducted himself with a wit that was entirely missing, say, Johnny Depp's attempts to self-subvert back in the nineties. When Depp moved to Paris in order to make himself over in the likeness of Hunter S Thompson, or dragged film projects down into Chaplinesque sight gags and puerile self-mockery, he came off as a self-delluding berk: a teen idol in flight from the his own meal ticket. Franco's adventures in Wonderland have an altogether airier, less self-sabotaging feel. His turn as Harvey Milk's lover in Milk and as the beatific stoner in Pineappple Express revealed an altogether lighter talent, as relaxed as a cat soaking up sunlight. Like Travolta, he is one of the truly natural attention hogs, so much so that his turn seducing himself for the NYT's excellent series of shorts seems born less of narcissism, and its attendant attempt to repair an irreperably shattered self-image, than on a simple desire to keep company with the rest of the civilised world, all of whom are already grooving on his Royal Franconess. Maybe this sounds I'm drawing hearts on my desk. Could be. This blog is not immune to the odd man-crush. I met Franco recently, for a profile I was writing for the Telegraph, and was completely baffled by the guy. His enrollment in not one but four graduate school programmes, his book of short stories, his TV appearances, cameos, art installations and assorted extra-mural celebrity 'happenings' all testify to the all-consuming rapacity of one of the world's largest egos, and yet he was strangely free of vanity, with one of thickest skin I've yet found on a celebrity, still less an actor. I don't think I've met one who seemed to need praise less. Quite how seriously he wants to be taken — or whether his career is in danger of turning into one giant wink — remains to be seen. I didn't like 127 Hours but think he has a genuine talent for the giving and receiving of delight. Movie careers have been built on far less. He seems to actually enjoy being a movie star, which is a rarity in and of itself these days, when most celebrities are taught to hate the blandishments of fame on sight. Franco gobbles them up like a child scarfing coco-pops.