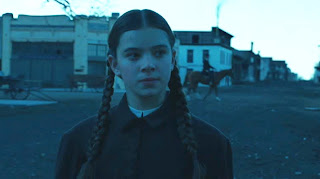 'The new “True Grit” is that rare thing — a truly religious movie. In the John Wayne version religiosity is just an occasional flourish not to be taken seriously. In this movie it is everything, not despite but because of its refusal to resolve or soften the dilemmas the narrative delivers up.' — Stanley Fish

It's a great piece of commentary, worth reading in its entirety, which gets quite close to the type of filmmakers the Coens are in the process of becoming. I've always thought of them as like Kubrick but with sense of humor — as close to a working definition of a Higher Power as I will ever come. Not that they are getting religion, exactly, but the more they ease up on the screaming fat men (a blemish from which not even True Grit is wholly free), the more classically American they feel. Are there filmmakers working today more knottily rooted in their own backyard? Almost every other director of note is either jetting off into hyper-space, or enthusiastically plumbing inner-space, and while no Coens movie can shake itself entirely free of the suspicion that the whole thing is unfurling in the brother's frontal lobes — Fargo, in particular seemed close to a full-on conceptual white-out — their best movies carve up very real quadrants of the map, dig deep into the local exotica, put down gnarly roots. They’ve set down in New York in the 1950s (The Hudsucker Proxy), Los Angeles in the 1940s (Barton Fink), Mississippi in the 1930s (Oh Brother Where Art Thou?) and 1990s (The Ladykillers), Texas in the 1980s (Blood Simple) make that twice (No Country For Old Men), Minnesota in the 1960s (A Serious Man) and 1990s (Fargo), not to mention Arizona, Washington, North Dakota, Santa Rosa and now Arkansas in the 1880s — nothing less than a patchwork quilt of America. None of which should lead us to think that the Coens are getting all patriotic on us, either. The angry mob of locals that chases them from every region they portray, from angry Arizonans to miffed Minnesotans, should tell us that their eye, and ear, is too pitiless for that. Though the film's box office is heartening, True Grit is too cussed and cruel to make nice with Christmas audiences; it shrinks beneath the hug of mainstream acceptance. The Coens seem destined to remain strangers in their own home. But this is what makes them so American, I think. The America they connects with is not the America of Wayne, Spielberg, Rockwell — those great maximalists, celebrants of home and hearth — but the spindly, astringent minimalists who have charted it's itinerant underside: the America of Wyeth's paintings, Hammett's prose, the comic diminuendos of fellow Minnesotan Charles Shulz, the clean lines of quaker furniture and puritan virtue, and the "plain language, devoid of all ornament" identified by de Tocqueville. "Well, that didn't pan out like I thought," says Rooster, after one particularly bloody imbroglio. Neither does the film. As Fish points out, it's not a whole barrel of fun; its wintery landscapes are leached of color, its plot robbed of forward thrust by fidelity to the meandering byways of Portis's plot (is there a limit to the number of times Le Boeuf can change his mind about whether he wants to be with the other two or not?), but it may be the most authentic American period piece since Michael Mann's Last of the Mohicans, knotted and bony and fascinating, and I'm ready to forgive it much for the sheer bliss of its penultimate scene, in which all the film's cruelty and cussedness fall away, like flesh from the bone, for a single, selfless act of rescue. The sequence is touched by genuine magic, the landscape scrolling behind Rooster by means of a Night-Of-The-Hunterish back-projection which seems to cradle the moviegoer as carefully as Cogburn's cradles the unconscious Mattie. The effect is almost transcendentally comforting and easily the most touching thing the Coens have ever filmed. So no, they are not about ready to get God — they remain as thrillingly atheist as they come — but in His absence, they do seem to be filling His boots a little more responsibly. B