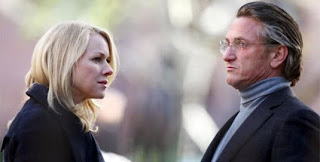 The problem with Fair Game is simple and it is this: the Wilson-Plame marriage starts to wobble. That's it. That's the single flaw that turns the film into drag. The film is a lopsided narrative to begin with, not a David-versus-Golitah victory story but a David-barely-survives-Goliath story. The deck is so unrelentingly stacked against them couple, that the idea they might begin to peel apart as a couple is simply too much. I know it 'happened' but it denies the audience the one thing they want, which is the sense of these two being brought together in the heat of battle. Plus it involves Penn and Watts in a marital meltdown acting workshop, never a pleasant experience at the best of times, but at a time when the audience has its eye on a much larger battle — that with the White House. It's a bit like All The President's Men, if Woodward and Bernstein had started to get on each other's nerves. Who cares?
*An occasional series devoted to a movie's problems when those problems can be distilled down to a single, correctable flaw from which everything flows — kind of the opposite of 'high concept.'