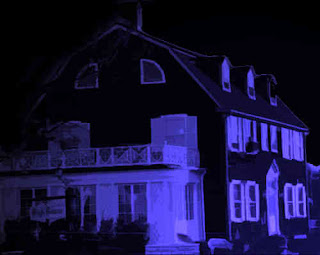 How scary is real estate? If you’re attempting to find anything with two bedrooms below $600,000 in the West Village, then you can be in for the fright of your life, but on cinema screens, we haven’t had a decent haunted house flick since 1979’s The Amityville Horror. The film came heralded by a classy poster featuring a demonical-looking house (“For God’s Sake Get Out!”), together with the dubious assurance, “based on a true story,” for those who thought the Bates motel would have been more frightening with a real zipcode. Audiences were this allowed the singular frisson of imagining a vast penumbra of bad karma rippling out from the house, the film, and all who touched it: was that a loose screw causing your cinema seat to wobble, or were the forces of darkness amassing to strike?

The house in question has a few problems — blocked toilets, mysterious drafts, self-slamming windows, and an abnormally large indoor fly population — but nothing a little DIY wouldn’t fix. Into the breach step Margot Kidder, her three kids and new husband, played by James Brolin, who bears an striking resemblance to the bearded guy in the ‘Joy of Sex’ illustrations. Of more pressing importance, though, is the striking resemblance he bears to the mass murderer who lived in the house before, and as the film progresses, Brolin starts chopping wood with strange intensity, staring distractedly into the fire, and taking on the sort of waxy pallor that normally indicates imminent possession by the unquiet dead, although Kidder suspects a case of “the flu that’s going around.”

Not a bad guess, actually, given the number of people looking distinctly green about the gills in this movie. Viewers looking to revisit a great shocker from yesteryear may be surprised to find that the film’s body count is in fact shockingly low — the dramatic emphasis falling, not on the matter of who will first lose their life, but who will first lose their lunch. The local priest comes to bless the house, but promptly vomits, and spends the rest of the picture looking extremely queasy every time he attempts to pick up the phone. A nun follows up with a house call only to barf, too, before she can make it back into her car. Ah, the seventies: what a great decade it was for onscreen hurling! It all started with The Exorcist, of course, whose gouts of projectile-vomited pea-soup prompted audiences to barf right back — a touching instance of call-and-response audience interactivity. The same thing happened with Jaws, whose audiences could retch along with retching cop, and squirm sympathetically as Richard Dreyfuss attempted to keep his breakfast down during the autopsy scene.

One of the great things, in fact, about watching these classic horror movie franchises on DVD is the chance you get to carbon-date the clichés of a bygone era. You can tell, for instance, that The Amityville Horror was released after Jaws because Spielberg’s mayor is on hand to represent the forces of silencing bureaucracy; and you can tell it was released post-Exorcist because the priests wear trilby hats and debate church doctrine.

Not that the film wasn’t without the odd original flourish of its own. There is the startling creative freedom shown by Margot Kidder’s wardrobe, for example — kilt, knee-socks and loosened tie for that rapacious schoolgirl look — and it is with the pleasure of old acquaintances long forgot that you establish Amityville as the film that first used spooky child choirs on the soundtrack, and the whole Indian-burial ground sub-plot. One of the more endearing things about the film is the way it suggests a whole raft of dramatic possibilities — possession by dead Indians, by mass murderers, by Satan himself — and then boldly forgets to follow through on any of them. When the film was first released there was cries of hoax, although only reality could be this dramatically piecemeal; surely someone fabricating the whole thing would have dreamed up a slightly more terrifying bogeyman than buzzing flies. The film’s spectacular no-expense spared climax features Rolin falling into a cellar of black gloop.

Zip forward 3 years to The Amityvile Horror II: Possession, and the special effects have improved, after a fashion: we now have fireballs in the cellar, and some of those pulsating body parts that started showing up everywhere after An American Werewolf in London. Here, they appear on the teenage son of the house, now our dramatic focus as the producers, not content with the first film’s glancing similarities to The Exorcist, decade to flush them right out into the open. But there are signs, too, of a new era dawning: the priests are still barfing and not picking up their phones, but thanks to Steven Spielberg’s appearance as the new magnetic North of the filmmaking universe, we have an assortment of flying toys and even a demonically-possessed Sony Walkman. As the Amityville franchise unfolds, in fact, it starts to tell of an altogether different story from that unfolding onscreen, though one equally rich in panic: a story about the makers of a ropey horror-movie franchise who, terrified of failing to attract teenagers, find themselves diabolically possessed by the spirit of Hits Past, Present and Future.

One year later, we have Amityville 3-D, and the horrifying transformation is complete: the teenagers have multiplied, the body-count is ticking along nicely, and the house has now expanded its powers to include long-distance fly attacks, the ability to flambé speeding cars, and to propel rotting demons from the basement, all in 3-D. Not only that but we have Meg Ryan, who barely needs 3-D to stand out: she strolls into the house as if it were an ice-cream parlour, chews on her lines like bubble-gum, and smiles sweetly while the film deflates, gently, around her. Put her cameo together with Tom Hanks’ similar walk-on part in He Knows You’re Alone, just three years earlier, and you are left with the satisfying though that America’s future sweethearts were, even then, wading towards each other through rivers of blood in order to make their date with one another atop the Empire State Building.