The Mad Men Finale: Why I Wasn't Buying 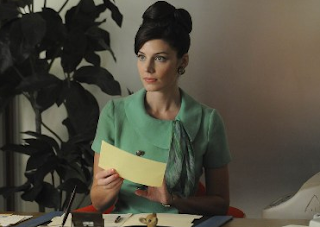 "Faye has so much to offer: smarts, sympathy, insight, lamp-rattling sex, genuine self-sacrifice. But not romance, or at least Don’s fantasy of it. On paper, they seem like a great match — except for the fact that Faye is awful with kids and perhaps requires too much from Don... Faye would like Don to keep doing that hard nitty-gritty work of digging into his past, but he's already thrown out that journal. He’s ready to cannonball into the future... The proposal is rushed, sudden, and ill-informed, plain and simple. All Don knows is that she’s pretty, tall, bad at answering the phones, and that she likes the arts, advertising, kids, and, most important, him. But it's important that she's not just good with kids, but great with kids (a Von Trapp!). And there is that one moment when you see something real. In the diner, Sally knocks over a milkshake and for a split second it’s chaos: Sally recoils, horrified. Don violently jerks his head around to find a waitress. It's like a grenade rolled out onto the table. And then sweet, calm Megan says, “It’s just a milkshake,” defusing the crisis. It’s a strange and brilliant little vignette — the kind of thing that’s almost impossible to describe when you try to explain how much you love Mad Men. And it clarifies that Don is falling in love with Megan, in large part, because she’s not Betty, exploding into rage, or Faye, nervous and freaked out around the kids. She’s not high-strung and unpredictable....Don's sudden proposal was shocking and strange, but it wasn't out of character." — Logan Hill, New York

That's not the issue. Ad men marry their secretaries all the time, as roger Sterling could attest; Don Draper is perfectly capable of choosing a flight into fantasy over Miss Sobriety. The question is whether this turnaround was sufficiently dramatised or not. The writers were trying to put a supertanker through 180 degrees in the space of one episode, and then pass off the viewer's whiplash as part of the plan. The makeover of modelicous Megan, who wafts through every scene as if undulating on a heat-wave of her own hotness, into Maria Von Trapp required more than a spilled milkshake. She responds well to the spillage not because she is the polar opposite of Betty, but because the writers spotted an opportunity to make that point. I felt their sticky fingers everywhere. Likewise, I never bought Faye Miller's uncharacteristic failure when it comes to the kids, despite being winner of the 1964 Empath of The Year Award. So the model turned out to be better with kids than the psychologist. If you say so. There was too much of this in the finale, not bad writing exactly, just fur brushed the wrong way, waiting to be brushed back.