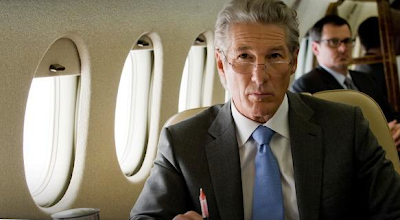 In Arbitrage, Richard Gere plays a crooked Wall Street financier who walks off when spoken to, shushs women with a single upheld finger, caresses their face as if considering buying a fine piece of sculpture, breaks off eye contact with you when you say something he doesn't like, stares into deep space and occasionally gets his hair mussed between the revolving door of his brokerage and his waiting limo. He is, in short, Richard Gere — and quite magnificent he is at it by now. Pushing his mid-sixties, his hair gorgeously leonine, he still walks like a 25-year-old, with that same smooth strut that propelled him through American Gigolo as if on silver ball bearings. His best roles — in Gigolo, but also a sleazy cop with his hands up everyone's skirt in Mike Figgis's excellent Internal Affairs, Brooklyn's Finest and now Arbitrage — have allowed him to suggest a roiling, narcissist's disloyalty beneath his sleek hood-ornament beauty. He gets angry the way kids get angry: when things don't go their way. And a lot doesn't go his way in Arbitrage — a car crash that kills his French mistress and from the site of which he flees, the tightening noose of a police investigation led by Tim Roth, threatening a billion dollar deal that, if it doesn't go through, could expose the fraud he has been perpetrating on his company's finances. I didn't understand much of it, but I understood the beading of perplexity on Gere's brow, the pain of his broken ribs, the funk of anxiety brought on by a late-night text. The film is not a grabber — there are no set-pieces apart from that car cash, and little action — but nor does it let go of you. You hope he gets away with it right to the last minute. B