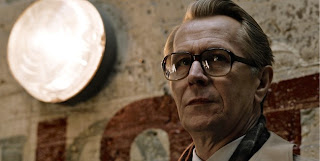 Tinker, Tailor, Soldier Spy is a difficult film to assess because there are fantastic things in it — a plane descending into view behind a scene of dialogue until it's propellors appear to clip the actors; a small, sooty mark that appears on someone's cheek that turns out to be a bullet entry point; some extraordinary soundtrack choices probing the chintzier end of early seventies brass-band pop — but I was blessed with only the faintest inkling of what was going on at any given point. That I was never quite bored tells you just how close to greatness Tomas Alfredson's film cis: the twitchy, rats-in-a-sack treacherousness of the upper eschelons of British intelligence is marvellously conveyed; John Hurt goads everyone on with bitchy disgust, as if willing everyone to sink to a depth at which he can properly hate them; Colin Firth is so bouyed by hail-fellow good cheer that you have no option but to think him capable of perfect perfidy; and Gary Oldman's Smiley wields predatory silences that work on his interlocutors like a cold window pane sucking warmth from a room. But. If everyone had swapped dialogue with the person standing to their right, I would barely have noticed, not for several scenes at least, so benignly and trustingly was I assenting to every plot twist. The film is like a modernist deconstruction of a much more plodding, longer version of the same film, which exists somewhere — in Alfredson's head, or buried somewhere behind Oldman's bifocals — and which you can only discern glimpses of, through the nooks, crannies and ellipses of the film in front of you. Like reading an annotated Ulysses that is all annotations and no Ulysses. Who knows. I was on a night-time transatlantic flight when I saw it. If it watch it again on the return leg — defecting, so to speak — I may unearth more treasure. B