The sidewalks of New York 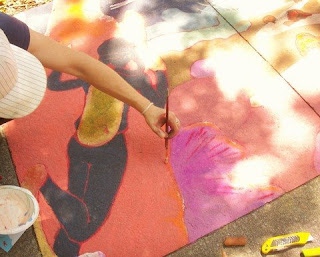 Whenever someone asks you why I am in New York, tradition dictates that I reply with a sentence that uses the words "dream" or "opportunity". If pressed, I point to the fact that I was offered a job here, although the magazine I came out for is no longer in existence and the number of stamps in my passport tells you I was headed here long before that. America has been in my head for as long as I can remember. The simplest and most truthful answer to why I am here, in fact, is, "the sidewalks."
My vision of New York has always been bound up with its sidewalks. I can remember seeing Sesame Street when I was eight, or thereabouts, and being struck by them — big concrete walkways, the concrete a much lighter colour than it is in the UK, with the neatest of grooves separating each slab. They seemed so wide and inviting, big boulevards crying out for all manner of activity. The sidewalk, after all, is where most kids get to roam free. Roads are off limits: noisy dangerous places you cross with your mother attached to your elbow. And buildings are boring: the places the adults go to do their business. Which leaves, you, aged 8, with the sidewalk. That's your kingdom, as a kid. That's where you roam free.
We didn't have sidewalks in the UK; we had pavements, a very different thing, narrower, pinched walkways between roads and buildings which people funnelled down on their way to work. Ech. Some kids skateboarded on them, others rollerskated. I used to draw on them, using coloured chalks, outside my mother's shop in Brighton: pictures of Superman, mostly, and Batman, and Darth Vadar. I had a hat which passersby dropped money into, thus supplementing my pocket money so I could then go buy more Superman comics to study and transcribe. I used to get quite a lot of money, although once I was accosted by a crusty old man who told me it was "disgusting" that a child as young as I was was should be begging. I told him that I wasn't begging, I was drawing, but he didn't listen and staulked off.
What I really needed, of course, was a New York sidewalk. People draw on them all the time. They've got acres of room, plenty of admiring pedestrians and nobody calling them beggars. They're street artists. I'm no longer drawing, but sometimes, I'll be walking down one of the avenues, the sunlight will hit the sidewalk, dazzlingly, and I'll look about and think: this is the life. A nice, big, wide sidewalk. I could do anything.