REVIEW: THE WOLF OF WALL STREET 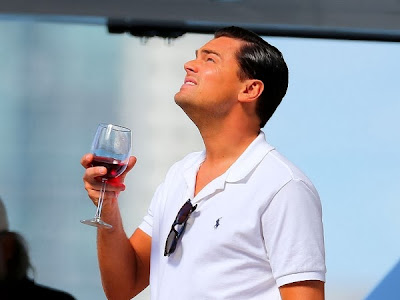 From my review of The Wolf of Wall Street:—

Scorsese’s sense of sin, from Whose That Knocking At My Door? on has always been from the inside out. It’s not enough to show sin. Nor is it enough to tell the audience that sin is sinful. Scorsese wants the audience to feel as if they have sinned — exiting the theatre sheepish with our own enjoyment. His pitch-fork atunement to lives that are both spiritually dead and, at the same time, astonishingly vital — rotten but ripe, like apples in Dutch nature mortes — is even more acute than it was when he made Goodfellas and Casino, although he is not nearly as interested in the details of money-laundering, or bribery, as he was in those pictures. Winter’s script make no attempt to explain Belfont’s scams to us — several times, he tries, and then gives up, with a wave of his hand, “you don’t give a shit, do you?” — and the line gets at what is so shallow about Wolf of Wall Street and most gleeful. Whatever depths it possessed do not come from the world of finance, just as Raging Bull’s depths did not come from the world of boxing, but from the intimate knowledge of his own self-destruction that Scorsese experienced in the seventies as he rose, meteor-like, to drug-fuelled, Palme—D’Or-winning heights, before burning up in his own heat.   This is the story behind Raging Bull and Goodfellas and Casino, too. It is burned into his psyche — the only story really worth telling. Any time Scorsese’s filmmaking gets near this arc, it catches fire spectacularly and the movie takes off in a shower of sparks, but with slightly less sense consequence and greater giddiness each time, as the memory of the lows fade and the highs burn in retrospect ever brighter. In The Wolf of Wall Street the 71-year-old director films as if sucking the sap from his stripling actors. Make no mistake: He is the wolf. (A-)

Approaching the final chapter of my Scorsese book, my listing of his films has altered a little. The top five are unaltered, but The Last Waltz  has risen (as have all the docs) and The Wolf of Wall Street has snuck into the top ten. The Departed has slipped a little.