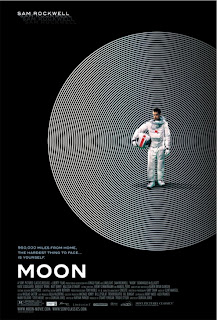 What are the chances that Moon is a good movie? If I told you that it was a debut feature directed by David Bowie's son, Duncan Jones, its chances would have to sink sharply. First time director? Son of Major Tom? Working out whatever weird inter-planetary issues he has from the strange alienated, sci-fi infused childhood he surely had? If I tell you that the movie was financed by Sting's wife, Trudie Styler, the movie's chances surely drop off the chart. With the exception of Time Bandits, no movie funded by a rock star has ever turned out to be good, let alone the rock star's wife, who probably knew the kid when he was growing up and was happy to give him any money was lying around her husband's tudor mansion slash yoga studio while he was in the middle of one of his five-hour Tantric orgasms. It was with some perplexity, then, that I announce that Moon is not just a good movie, but a very good movie, beautiful and haunting and original — the best sci-fi movie I have seen since Blade Runner.

Let me just check that against my hyperbole meter... hang on a minute.... Yep..... It checks out. We're good. The best sci-fi movie I have seen since Blade Runner, although I should distinguish between two type of sci-fi movie, here. There's the type we get every year — exciting and fast with laser guns and exploding planets, with a lineage that stretches back to Star Wars. And there there is the other, much rarer kind — thoughtful and strange and sad, with a lineage that stretches back to Alien and 2001: A Space Odyssey. That is the kind of movie Moon is. Nor is it shamed by that company.
I'm not going to tell you a thing about it. I had the good fortune to see it blind, attracted solely by the cool poster and the beautiful stills I had seen in the paper, which exactly resemble those dusty haunting shots of the lunar surface taken by the Apollo crew with those fancy cameras that everyone wants but whose name escapes me right now. I will tell you that it stars Sam Rockwell, and only Sam Rockwell, which is fine by me because he has just become my favorite actor. I thought he was mesmerising in Snow Angels, which blew my mind on a transatlantic flight last year. There he played a charming wastrel so heartbroken by his ex-wife that it takes a while to realise that he is, in fact, psychotic. It takes the whole movie for you to realise that, in fact: it's one of the more subtle unraveling of one man's mind ever put to film. (Someone should get this man a copy of David Gates Jernigan — he's already got the narrator's rueful sarcasm down to a tee). Moon starts out in similar territory, with a character you suspect may be losing his sanity, and then..... but I'm not going to say anything. Just see it. It's one of those movies you wander out of going "where did that come from? Who made it? How? Where? When? Why?"